Harvard citation style: How to build a Harvard reference

There are two main elements in the Harvard citation style:

Click on the tabs in the box below to see examples of in-text citations and examples of reference list entries.

For more information on how to reference, including how to avoid plagiarism and academic misconduct, see the Student Services STUDYSmarter referencing guides.

Harvard is an 'author/date' system, so your in-text citation consists of author(s) and year of publication.

In-text citation of a book (the same format applies for a journal article):

Note that there is no punctuation between the author's surname and the year of publication.

If you quote directly from an author or paraphrase a specific idea or piece of information from a source, you need to include the page number of the quote or passage in your in-text citation.

It has been asserted that the primary "role of management is to combine, allocate and utilise the organisation's resources in a way that will assist the organisation to achieve its objectives" (Bray et. al. 2014, p. 129). 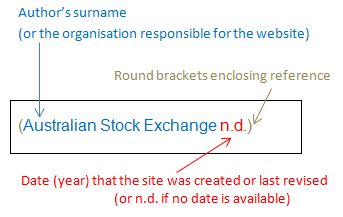 What if I want to cite some information that someone else has cited?

If you read an article or book which cites some information that you want to cite, always refer to the source where you found the information, not the original source. For example:

Sue reads an article by Alex Byrne in the Australian Library Journal in which he cites or refers to statements made by Tim O'Reilly on his website at http://www.oreillynet.com/pub/a/oreilly/tim/news/2005/09/30/what-is-web-20.html Sue wants to refer to O'Reilly's statement in her assignment.

Sue would acknowledge O'Reilly in her text but her reference is to the source where she saw the information. Sue might write as her in-text reference:

In her reference list Sue would write a reference for Byrne's article because that's where she sourced the information. The entry in her Reference List would be:

Two or more works cited at one point in the text

If two or more works by different authors or authoring bodies are cited at one point in the text, use a semi-colon to separate them:

The authors should be listed in alphabetical order.

When citing a work by two or three authors or authoring bodies, cite the names in the order in which they appear on the title page:

When citing a work by four or more authors, list only the name of the first author followed by the abbreviation et al. (meaning and others). Use this format for all in-text citations for the work, including the first appearance of that work:

If you are quoting a long piece of text (more than 30 words), the actual quote should be in slightly smaller font and indented from the left hand margin to distinguish it from the surrounding text. It can then be followed by an in-text citation. For example –

It was stated that:

If any similar qualitative research is to be undertaken in the future, then stringent controls should be put in place to ensure such statistical anomalies do not occur through lack of methodological rigor, particularly through corruption of data inadequately stored and processes (Mullane 2006, p. 66).

All in-text citations should be listed in the reference list at the end of your document.

Reference list entries contain all the information that someone needs to follow up your source. Reference lists in Harvard are arranged alphabetically by first author.

Journal article from an electronic database

The article title should be enclosed in 'single quotation marks' and should be in sentence case (only capitalise proper nouns).

The journal title should be in italics and every word should be capitalised (except for words like the, an, a, and etc).