Skip to main content
It looks like you're using Internet Explorer 11 or older. This website works best with modern browsers such as the latest versions of Chrome, Firefox, Safari, and Edge. If you continue with this browser, you may see unexpected results.

Just as statutes are the main source of domestic law in Australia, treaties have become the key source of law in international law. A treaty is a formally signed and ratified agreement between two or more nations or sovereigns.

It is important to remember that treaties do not come into force when they are signed. Most treaties will have a clause which specifies the requirements of the treaty entering into force. The clause may include a ratification date and a requirement that a certain number of parties have ratified before it can become law. 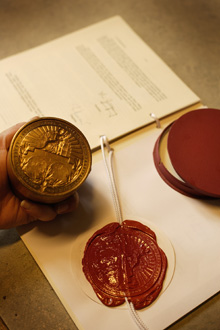 Official signed and sealed copy of a judgment of the International Court of Justice. Photograph: Jeroen Bouman - Courtesy of the ICJ. All rights reserved

Treaties can also be referred to as agreements, conventions, covenents and protocols. All of these terms have the same legal status but are not necessarily interchangeable. A protocol has the same legal standing as a treaty but is generally used to amend, supplement or clarify an existing treaty. The Kyoto Protocol's parent treaty is the Convention on Climate Change. Parties of the parent agreement can choose to ratify the protocol or not.

Definitions of key treaty terms and a glossary of terms relating to treaty actions is available from the United Nations Treaty Collection.

If you cannot find a treaty here it may not yet be "in force" You will need to look at the International Legal Materials (ILM), Hein Online or use the Australian Treaty Series (ATS) available from AUSTLII.

For more information on how to cite a treaty or other international legal materials refer to the Australian Guide to Legal Citation.